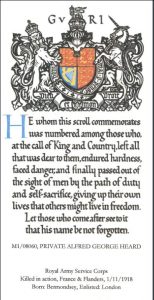 Walter and Alfred George Heard appear together in the 1911 Census as living Bermondsey, London. Respectively, they were a 22 year old Carman and an 18 year old Dustman in this survey.