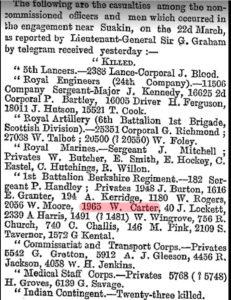 The Khedive’s Star of 1965 Private William Carter, 1st Berkshire Regiment. Carter was killed at the Battle of Tofrek, 22nd March 1885. He was also awarded the 2 clasp Egypt Medal with Suakin and Tofrek clasps, as confirmed on the medal roll. He is named as killed in the despatch from Lt-Gen Sir G Graham.

The Battle of Tofrek represents a famous day for the Berkshire Regiment. Following this Battle the Regiment was bestowed the title of Royal. Tofrek was another “soldiers’ battle” in which the discipline of individual soldiers averted a terrible disaster and turned it into victory. To mark its conduct at Tofrek (which was sometimes referred to as “McNeill’s zariba“) the Regiment received what was then a unique honour when on 1 October 1885 it was notified that:

“Her Majesty has been graciously pleased, in recognition of the gallant conduct of Princess Charlotte of Wales’s (Berkshire Regiment) in the action at Tofrek, to approve of the Regiment being in future designated Princess of Charlotte of Wales’s Royal Berkshire Regiment. Her Majesty has been further pleased to approve of the facings of the Regiment being changed from white to blue, the Royal facings.”