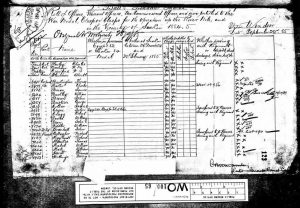 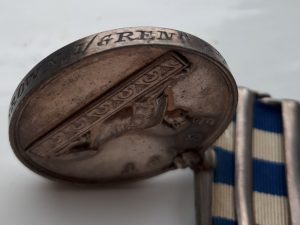 John Brown was a 21 year old joiner when he attested into the Grenadier Guards, 1st September 1879. He was born in Sunderland, County Durham at the time. He was over 6 feet tall when he attested.
He served a total of 12 years including 6 years in the reserves and saw service at home and in Egypt.
Private Brown is one of 37 men of the 1st Grenadier Guards to be awarded the clap Abu Klea. 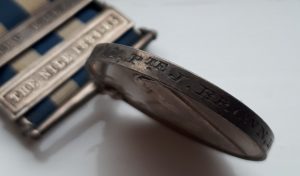 The Battle of Abu Klea was the inspiration of the Poem Vitaï Lampada by Sir Henry John Newbolt from which comes the immortal line – “Play up! play up! and play the game!” 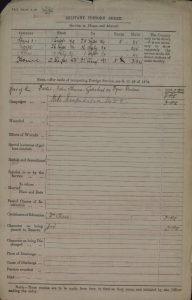 His Lieutenant was Count Albert Gleichen (Glick) who appears on the same medal roll. He wrote graphically of the battle of Abu Klea in the book. 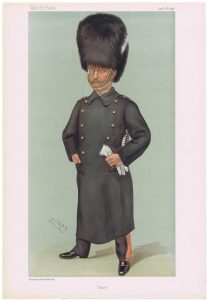 Gleichen joined the Grenadier Guards in 1881 and gradually rose through the ranks over the years, eventually becoming a Major General. He served in the short-lived Guards Camel Corps in the Sudan campaign in 1884–85 and with the Egyptian army in the Dongala campaign in 1896. In 1899–1900 he served in the Second Boer War in South Africa, and was mentioned in despatches for his actions during the Battle of Modder River 28 November 1899. I

n January 1900 he was appointed Deputy Assistant-Adjutant-General to the forces in South Africa. He was Sudan agent in Cairo from 1901 to 1903 with the local rank of Lieutenant-colonel, then Military Attaché to Berlin from 1903 to 1906. He and Kaiser Wilhelm II fell out, and Gleichen was sent to be Military Attaché in Washington D.C. from 1906 to 1907.

He met the Wright brothers while in Washington and wrote a report on their aircraft, but also failed to form a relationship with U.S. President Teddy Roosevelt. He was Assistant Director of Military Operations from 1907 to 1911. He served in the First World War, commanding the 15th Brigade from 1911 to 1915, and then the 37th Division from 1915 to 1916. He was an Intelligence Bureau director at the Department of Information from 1917 to 1918. He served as Chairman of the Permanent Committee on Geographical Names from 1919.