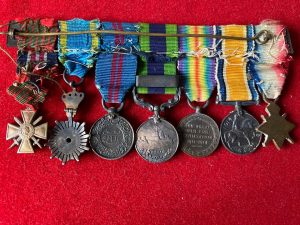 A fine campaign group of seven awarded to Colonel G. W. C. Lucas, 34th Poona Horse, Indian Army, who rose from Captain leading ‘B’ Squadron through the bloody hand-to-hand fighting in the trenches of Ypres to Colonel commanding his Regiment in Palestine, being twice ‘mentioned’ in the process. A distinguished career as a Cavalry Officer was capped by fame as a polo and lawn tennis player having frequently represented Devon County in the latter.

Guy William Caswell Lucas was born at St. Nicholas, Devon on 23 April 1879, the son of General Sir Alfred and Lady Florence Lucas of Dunmore, Shaldon. Educated at Malvern College he entered Sandhurst and was commissioned into the 34th (Poona) Horse as a 2nd Lieutenant on 20 July 1898, arriving in India two months later. Promoted Lieutenant on 20 October 1900 he was seconded as Adjutant to the Governor General of Bombay’s Bodyguard on 30 April 1904. Promoted Captain in this position on 20 July 1907 he was later to Command the Bodyguard and was awarded the Delhi Durbar medal in 1911, appearing on the Medal Roll in a Civil rather than Military capacity.

The outbreak of the Great War found the 34th Poona Horse at Secunderbad: Lucas, however, is noted on the Regimental Roll at that point as being on ‘leave out of India’. Despite this he soon rejoined his men in the initial rush to mobilise and was placed in command of ‘B’ Squadron. The unit sailed, by way of the Suez Canal, for France on the way meeting their Honorary Colonel, Rajah Sir Pertab Singh – who at that time was commanding the Jodhpur Lancers.

Lucas disembarked at Marseilles with the Regiment on 15 October 1914, from whence they moved to Orleans, the assembly point for the Indian Cavalry. The Poona Horse were to be the first unit from the Indian Cavalry to be engaged in France, entering the fighting west of Neuve Chapelle on 2 November 1914. Lucas’ ‘B’ Squadron together with ‘A’ and ‘C’ Squadrons (a total of 255 men) were called forward to support the 2nd Gurkha Rifles against an overwhelming attack. During the ferocious hand to hand fighting which followed Colonel Swanston, leading from the front, was killed in a severe blow to morale, nevertheless the Regiment endured and the position was held.

Under the command of Major Malloy, who had taken command after Colonel Swanston’s death a raid was organised on the German lines and on 13 November the Regiment, along with the 2nd Gurkha Rifles and 39th Gahrwal Rifles attacked the line. Lucas was one of three Captains selected to join in this action, likely commanding the elements of ‘B’ Squadron that took part. The Great War continued in this vein for the cavalry for some time; they were either employed as a mobile reserve, backup for raids and attacks, or as work parties affecting repairs and improvements to the trench system.

Promoted Major on 1 September 1915 Lucas was to remain in command of ‘B’ Squadron for the majority of the war, which the regiment spent largely in France. They saw action on the Somme in 1916 and later at Flers-Courcelette and Cambrai, in 1917, with Lucas receiving a ‘mention’ that same year (London Gazette 1 June 1917, refers). At the start of the New Year Colonel Cooper, the C.O. since the death of Colonel Swanston, was invalided and Lucas was chosen to replace him in January 1918, while they were stationed in the reserve trenches. They were not to remain in France for long, however, being re-deployed to Palestine they arrived in Egypt on 29 March and reached the lines by April 1918.

Unexpectedly replaced by a resurgent Colonel Cooper in late April, by July Lucas was again in command after Cooper was promoted to command 14th Brigade. The role of the Poona Horse in Palestine was very different to France, being deployed as they would traditionally, in order to exploit gaps in the enemy line and scout positions. The award of the Order of the Nile was specifically stated to have been the result of distinguished work in Egypt and Palestine, referring to Lucas’s command of the Regiment in these actions.

A skilled horseman, he began to distinguish himself on the polo field, a sport in which he excelled – and notably he also commanded the bodyguard for the Duke of Connaught on his 1920-21 Royal Visit to India.

Further promoted Colonel on 3 June 1923 Lucas was to serve for another three years before being posted to the Reserve of Officers in 1926. He retired fully on 23 April 1939 going on to live in Marldon, Devon and represent that county several times in various lawn tennis competitions around the country. Lucas died at Torbay Hospital in 1956. His widow, Mrs A. Lucas, donated his silver Polo cup to the Regiment – then part of the Indian Army – on 16 June 1978 were it was placed in the Officer’s Mess.

electronic copies of images and photographs can be supplied following the recent sale of his main medal group.