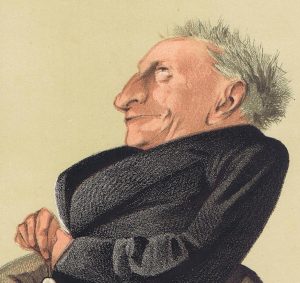 Original Lithograph with the caption at the bottom of the print: Not an M.P.

Alexander William Kinglake (5 August 1809 – 2 January 1891) was an English travel writer and historian. He was born near Taunton, Somerset, and educated at Eton College and Trinity College, Cambridge. He was called to the Bar in 1837, and built up a thriving legal practice, which, in 1856, he abandoned to devote himself to literature and public life. His first literary venture was Eothen; or Traces of travel brought home from the East (London: J. Ollivier, 1844), a very popular work of Eastern travel, apparently first published anonymously, in which he described a journey he made about ten years earlier in Syria, Palestine and Egypt, together with his Eton contemporary Lord Pollington. Elliot Warburton said it evoked “the East itself in vital actual reality” and it was instantly successful. However, his magnum opus was THE INVASION OF THE CRIMEA: Its Origin, and an Account of its Progress down to the Death of Lord Raglan, in 8 volumes, published from 1863 to 1887 by Blackwood, Edinburgh, one of the most effective works of its class. The History, which Geoff Bocca describes as a book “by which no intelligent man can fail immediately to be fascinated, no matter to what page he might open it” has been accused of being too favourable to Lord Raglan and unduly hostile to Napoleon III for whom the author had an extreme aversion.

The town of Kinglake in Victoria, Australia,[3] and the adjacent national park are named after him.