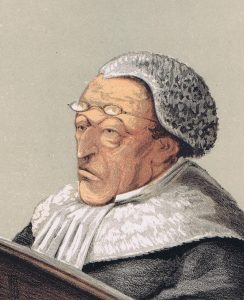 He was a Scottish jurist and politician who served as the Lord Chief Justice for 21 years. A notorious womaniser and socialite, he heard some of the leading causes célèbres of the nineteenth century. In 1847 he decided to stand for parliament, and was elected unopposed as Liberal Member of Parliament for Southampton. His speech in the House of Commons on behalf of the government in the Don Pacifico dispute with Greece commended him to Lord John Russell, who appointed him Solicitor-General in 1850 and Attorney General in 1851, a post which he held till the resignation of the ministry in February 1852.

Original Lithograph with the caption at the bottom of the print: The Lord Chief Justice of England