Fellow of the Royal Society 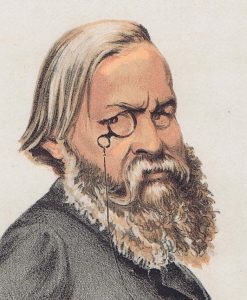 Beresford Hope’s most prominent public feature was his ardent support for the Church of England. According to George Wakeling, “in Parliament his voice, in his slow, rather harsh, but very impressive way, would be raised on every Church question”. He was especially steadfast in his opposition to the Deceased Wife’s Sister Bill. While at Trinity College in 1839, he was, along with John Mason Neale and Benjamin Webb a founder of the Cambridge Camden Society (later the Ecclesiological Society). He re-established it in 1879 as the St Paul’s Ecclesiological Society. A very wealthy man, he purchased St Augustine’s Abbey in Canterbury in 1844, to rebuild it as a college for missionary clergy. He also supervised the commissioning and construction of the church of All Saints, Margaret Street, London, to the designs of William Butterfield on behalf of the Ecclesiological Society. Beresford Hope was also a writer on archaeological, architectural, ecclesiastical and artistic subjects and was President of the Royal Institute of British Architects from 1865 to 1867 and a trustee of the British Museum. He co-founded the “Saturday Review” in 1855. He was elected a Fellow of the Royal Society in 1880. In 1873 he was invited to lay the foundation stone of the new Christ Church in St Leonards-on-Sea, East Sussex. Beresford Hope was active in the funding Canon Nathaniel Woodard’s national network of Woodard Schools.

Original Lithograph with the caption at the bottom of the print: Batavian Grace