He was born at Gloucester Place in Marylebone, London on the 9th April 1846 as the eldest son of barrister of law and Justice of the Peace for Surrey Thomas Sydenham Clarke and Julia Hilton. He was the Grandson of General Tredway Clarke of the Madras Artillery.
In 1851, aged 5, he lived with his parents at their home, Woodhayes in Wimbledon, Surrey. The family later moved to Kingsdown House in Ringwould, Kent. Upon completion of his education at the Royal Military College Sandhurst he was commissioned as an Ensign (2/Lt) in the 60th Regiment of Foot. He was promoted to Lieutenant in April 1869 and was employed as an Adjutant from 1871 through to July 1878 when he was given his Captaincy. 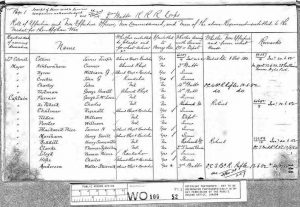 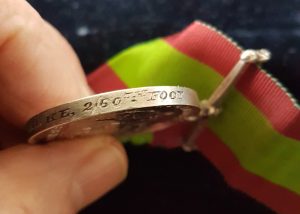 On the outbreak of the Second Afghan War in 1878 Captain Clarke, serving with the 2nd Battalion, 60th Foot was stationed in Mirat and under the command of Major Cromer Ashburnham they left on the 18th October 1878 for Multan.

From here they headed to Afghanistan via Sukkur, across the Kach Desert and through the Bolan Pass eventually arriving in Quetta. Captain Clarke spent most of 1879, from February to December, in Afghanistan.
His Obituary, in the Cheltenham Chronicle and Gloucestershire Graphic of November 15th 1930 confirms that he also served in the First Boer War in 1881, in the Transvaal Campaign with the Natal Field Force. In September 1881 he was appointed Adjutant to the 2nd Middlesex Rifle Volunteer Corps, a detachment of the Kings Royal Rifle Corps.
He was made Major in January 1883 and retired as a Honourary Lieutenant-Colonel in 1886.
The 1891 census shows him aged 44 living in Over Wallop, Hampshire with his wife Fanny, aged 32, from Dulverton, near Wellington, Somerset, their three children, Reginald, aged 7, Basil Beak, aged 5 and Guy Cuthbert, aged 3, along with four servants.
He rejoined the British Army Reserve of Officers in 1899 after the outbreak of the Second Boer War. He retired for the final time in 1902 after the hostilities in South Africa were concluded.
His Obituary also confirms that, in the First World War, the Colonel was responsible for the local organisation for re-clothing soldiers that had been treated in the V.A. hospitals in the Cheltenham District. This work covered 10 hospitals.
Lieutenant-Colonel Clarke Died at his home, 1 Sandown Lawn, Albert Road, Pittville, Cheltenham on the 7th Nov 1930, aged 84, the year of his golden wedding anniversary.