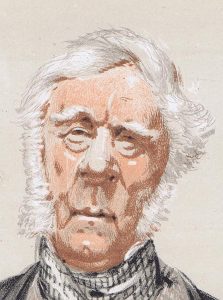 As Straight As A Reed

Rous entered the Navy on 28 January 1808 (aged just 13) as first-class volunteer on board the Royal William, under the command of Captain the Honourable Courtenay Boyle, and the flagship of Sir George Montagu, the Commander-in-Chief, Portsmouth. In February 1809 he moved into the 74-gun Repulse, Captain the Hon. Arthur Kaye Legge. After taking part in the Walcheren Campaign, in November 1809 he became a midshipman aboard Victory, flagship of Sir James Saumarez in the Baltic. In March 1811 he joined the ship Tonnant, Captain John Gore, employed off Lisbon and in the Channel; and from December 1811 he served in the frigate Bacchante, Captain William Hoste, taking part in the Adriatic campaign.

There Rous took part in numerous actions; on the night of 31 August 1812 he took part in the cutting out from the port of Lema, near Venice, of seven vessels loaded with ship timbers for the Venetian government, together with French xebec Tisiphone and two gunboats, and on 6 January 1813 the boats of Bacchante and the sloop Weazel successfully captured five enemy gun-vessels in the neighbourhood of Otranto. On 15 May 1813 he assisted at the capture and destruction of the castle and batteries of Karlobag, and on 12 June he commanded the Bacchante’s yawl in the capture of seven large gun-boats, three smaller gun-vessels, and 14 merchantmen at Giulianova. The British boats approached and boarded under a heavy fire of grape and musketry, while the Marines landed on shore, driving off 100 enemy troops and capturing two field guns. Rous was put in command of one of the merchantmen, laden with oil, which broached and capsized in heavy weather around midnight, and was only kept afloat by the buoyancy of her cargo. Rous and his prize crew were eventually rescued by another prize around 4 a.m. Into 1814 Rous participated in the capture of Rovigno, the island of Lesina, and the fortresses of Cattaro and Ragusa.

On 18 May 1814 he was promoted to lieutenant and from August 1814 until December 1815 served aboard the frigate Maeander, Captain John Bastard, off Lisbon and in the Mediterranean. From January 1817 he served aboard Conqueror, the flagship of Rear-Admiral Robert Plampin at Saint Helena, and on 2 August was appointed acting-commander of the 14-gun sloop Podargus. His promotion being confirmed on 26 November 1817, he was then appointed to Mosquito, finally returning to England in mid-1819. He then commanded the brig-sloop Sappho at Cork from November 1821, and the sixth-rate Hind in the Mediterranean from February 1822.

Rous was promoted to post-captain on 25 April 1823, and from July 1825 commanded Rainbow in the East Indies. He visited Australia, and in April 1827, organised Sydney’s first regatta. In August 1828, he explored the Tweed, and he discovered, named and explored the Richmond River, both in northeastern New South Wales. The area between these rivers is known as Rous County, but counties in Australia are not widely known and are mainly used for cadastral purposes. While in Moreton Bay he named the Rous Channel, Dunwich, and Stradbroke Island, after his family titles and influenced the naming of Ipswich, Queensland.

Rous returned to England in August 1829, and from November 1834 commanded the frigate Pique. His ship ran ashore on the coast of Labrador in the Strait of Belle Isle in September 1835 and was greatly damaged. Rous, however, brought her across the Atlantic Ocean with a sprung foremast and without keel, forefoot or rudder, and though the ship was making 23 in (0.58 m) of water an hour.

His father owned a stud farm in Suffolk and won the 1815 2,000 Guineas with the colt Tigris. Rous, always fond of the sport became a steward of the Jockey Club in 1838, a position he held almost uninterruptedly to his death. In 1855, he was appointed public handicapper. In that role he introduced the weight-for-age scale. He managed the stables of the Duke of Bedford at Newmarket for many years, and wrote a work on On the Laws and Practice of Horse Racing that procured for him the title of the Blackstone of the Turf.

The Rous Memorial Stakes was named in his honour.

Original Lithograph with the caption at the bottom of the print: As Straight As A Reed,