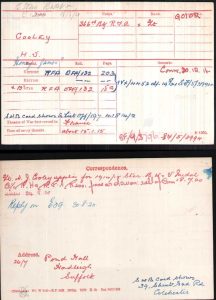 Henry James Cooley was born August 1877 at Carisbrook on the Isle of Wight. He was a 15 year old stonemason when he enlisted, at Sandown, 4th May 1892 with 21st Newport Battery, Isle of Wight, Royal Field Artillery. He progressed through 29th Battery (Newport Div) as Trumpeter, to then be promoted through the ranks with 44th Battery in India. By 1900 he had attained the rank of Sergeant and embarked for South Africa. After the Anglo Boer War he returned to India for a further 5 years transferring to 79th Battery. He gained promotion to BQMS in February 1908.

Great War service – Cooley was commissioned 20th December 1914 and entered France with 366th Battery, January 1915.  On the 17th May, at Kemmel, he was severely wounded by a rifle bullet to the head resulting in skull fracture and some necrosis. He lost the use of his right arm and right leg and his speech was affected. He was 42 years old and had served for an excess of 24 years.

During his career he suffered 3 injuries resulting in Courts of Inquiry (to toe 1893, to head 1895, to wrist 1897) – copies included. The London Gazette 31st March 1917 records 2nd Lieutenant Cooley’s retirement on account of ill-health.