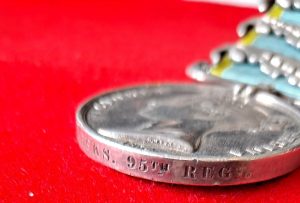 Thomas Leeks was born in Ellinsett, Ipswich and enlisted at Ipswich on 23 November 1847, aged 21 years. Shown in the Regimental Muster Books from July 1850 as a member of the band. Served in the Crimea campaign. Died in camp on 28 April 1855.

The regiment embarked for Turkey in March 1854 for service in the Crimean War. It sailed on to Kalamita Bay in September 1854 and advanced under heavy Russian fire at the Battle of Alma later that month. Due to the heavy casualties suffered in this attack the Regimental colours, normally carried by an ensign, were seized by Private James Keenan: he planted them triumphantly on the earthwork of the Great Redoubt. The regiment lost some 20 officers and some 180 other ranks in the battle. The regiment sustained further losses at the Battle of Inkerman in November 1854 and Major John Champion, who commanded the regiment during the battle, was killed in action. The regiment was also present at the Sevastopol in winter 1854: the regiment continued to sustain losses caused by the extreme cold and rampant disease. This led to the comment that: “there may be few of the 95th left but those few are as hard as nails.” The regiment embarked for home in June 1856.