severely wounded on the 20th May 1915 at Festubert 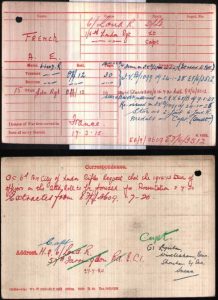 First World War medal trio to a 1st / 6th London Regiment Officer who was severely wounded on the 20th May 1915 at Festubert.

War Diary for the day 20th May 1915 ” Orders were received about 6 p.m. to relieve the 15th Battn. in the front line breastworks. This relief was carried out successfully under heavy shell fire. 2nd Lieut French and eleven other ranks were wounded….”He was permanently unfit for general Service but fit for service at home” 11th July 1916

Results of Proceeding of a Medical Board describes his wounds as follows – “that he was wounded on May 20th at Festubert. G.S.W. of right wrist and left leg. Piece of shrapnel has been removed from his leg on inner side. Extensive flesh wound of ant surface of forearm 3″ above wrist, injury of ulnar nerve, small wound to outer side of leg behind middle. No injury to bone or nerve.”

With this group is a series of copy letters from French describing his wounds and ongoing incapacity in which he challenges the decision that his wounds are not bad enough to qualify for pension. Also, several pages of War Diary