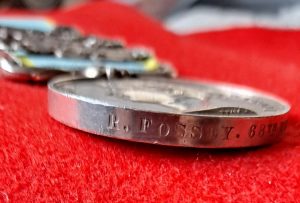 Robert Fossey was born in Sussex, 1819. As a 16 year old he appeared in Court charged with poaching (armed) and very soon he must have enlisted. By 1838 he is recorded as a Deserter but obviously returned to be recorded with the Regiment in Jamaica in 1841 and Malta 1851 prior to heading to the Crimea.