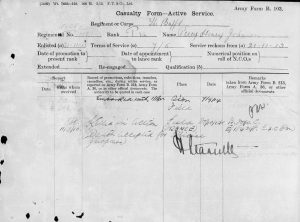 He entered France 7th September 1914 and is noted Death Presumed 20th October 1914 as per his Medal Index Card. Soldier Died in the Great War records him as Killed in Action.

Johnson is Remembered with Honour at the Ploegsteert Memorial.