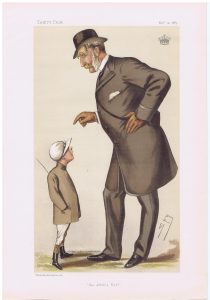 Original Vanity Fair Print Lithograph with the caption at the bottom of the print: The Affable Earl

Colonel Francis William Henry Fane, 12th Earl of Westmorland CB, DL (19 November 1825 – 3 August 1891), styled Lord Burghersh between 1851 and 1859, was a British Army Officer and racehorse owner. He campaigned in the First Anglo-Sikh War and the Battle of Gujrat during the second war. He also participated in the Crimean War, being awarded the Medjidie and the Légion d’honneur on 30 April 1857, and appointed a Companion of the Order of the Bath (CB) on 10 July 1855. On 1 August 1848 he was promoted captain and made aide-de-camp to Viscount Hardinge, the governor-general of India. He served under Lord Gough in the following winter, received a medal for bravery at the battle of Gujerat on 21 February 1849, and obtained his majority on 7 June 1849. On the conclusion of the Sikh war he returned to England and exchanged into the Coldstream Guards. On the outbreak of the Crimean war, he went out as aide-de-camp to Lord Raglan (his uncle by marriage). He served with distinction at the Battle of Alma (20 September 1854), bringing home Raglan’s despatches. He was appointed brevet lieutenant-colonel on the day of the battle, and lieutenant-colonel on 12 December following. Subsequently, he was present at Raglan’s death on 28 June 1855.

Dimensions approximately 23cm x 35cm. Overseas buyers, please do not buy without contacting us to agree shipping costs. Note that these lithograph prints are all in excess of 100 years old. There may be minor imperfections commensurate with age. Please do not hesitate to ask questions about shipping or condition.